” The angles of Thy abode (the Srichakra) which is made up of the nine moolaprakrithis or basic triangles ( the nine primary causative forces of the Universe) consisting of the four distinct Shiva triangles (with apex upwards) kept apart from the former by the bindu, with the eight-petalled lotus, the lotus of sixteen petals with the three circles around and the three lines, are counted as forty-four triangles.” 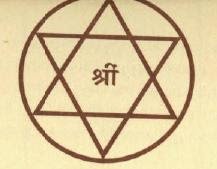 Barren women become pregnant, getting issues. The butter used for drawing Yantra to be consumed daily.