“The dust of Thy lotus-feet is the Island City, where from takes place the luminous sun-rise of spiritual illumination driving away the over-casting darkness of ignorance in the hearts of the devotees. It forms the cluster of flower buds from which gushes forth the nectar of intelligence. enlivening the dull-witted. It is a veritable necklace of wish-yielding gems for the poverty-stricken. And for those immersed in the ocean of wordly affairs, it becomes their uplifter like the Tusk of Vishnu, which raised the earth from submergence in pralayaa waters when He incarnated as the Cosmic Boar.” 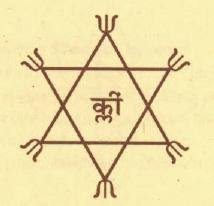 This sloka is a remedy for people who are weak in grasping and memory power. Extremely helpful in enhancing performance levels in academics. Atleast a recitation of 11 times a day will bring remarkable changes in a dull student. It is also important to note that the key objects mentioned in all slokas would bear fruit. In this particular sloka, the mention of gems and necklace would yield results as sloka attains power through chanting.This is also a prayer to one of the Dasavatharas of Lord Vishnu,the Varaha Avathaara!